In a time of volatility, GARY TOM illustrates the profound allure of the conservative, pragmatic and fundamental investment approach his company espouses. 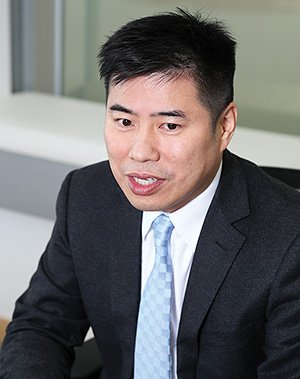 Gary Tom: “Instability always seems to have people focus back to the traditional models.”

Hardly is there a dull moment for investors worldwide. Men can make fortunes overnight and lose everything in less time. In 2015, Li Hejun’s record half-hour US$15 billion loss made headlines around the world. Things were made even more interesting with the devaluation of the RMB, among other suspenseful news.

“2015 is quite an interesting year,” says Gary Tom, Walton International President for Hong Kong and North Asia. “Volatility is running rampant in so many different investment fields and products, from the stock market to currency to commodities. That’s always difficult because investors, during volatile times, typically don’t like to take a lot of action. Fear sort of sets in,” he shares.

“We are always looking for new opportunities. In our business, even in a difficult time for investment markets, people seem to go back to the traditional, safer forms of investments – what we call hard assets. So it’s been very good for us in terms of growth, as we keep on exploring new opportunities in real estate and real estate development in the United States and in Canada.”

Developers and investors following the real estate market as well as the China economy have likely observed the year’s dip in the marketplace, along with the change in sentiment regarding China properties, as compared to the positive outlook at the beginning of the decade.

“I think a lot of that capital looks for different places. That need and desire for real estate still exists with those types of investors and developers, and we’re starting to see a lot of focus offshore, outside of China.”

While the property markets of Australia, Canada, and the United Kingdom Breaking Ground WALTON INTERNATIONAL In a time of volatility, GARY TOM illustrates the profound allure of the conservative, pragmatic and fundamental investment approach his company espouses. Gary Tom: “Instability always seems to have people focus back to the traditional models.” draw much interest, the United States has received the most attention, a benefit for Walton, as two thirds of its assets lie there. “There’s definitely a lot stronger appetite for investors wanting to develop properties in the US.”

Regardless of strategy or approach, Tom firmly believes that US property is essential for investors to get into.

“I think the main reason international money is flowing into US real estate is that people understand what has happened with it over the last ten years. There was the global financial crisis in 2007-08, and even after that a huge correction in the US marketplace. They see the US economy and the housing market recovering. Astute investors or institutions like to buy when the market starts to recover, not when it has peaked, like some other real estate markets have around the world. Valuations are a little bit higher right now. People believe that the valuations in the US, because of the correction, are at a good potential to get into.

“You also have currency, a separate issue in itself. It’s no secret that during volatile times, people still flock to the US dollar. In good or bad economies going up and down, one thing you can’t dispute is that the biggest economy in the world is still the US. Whether it’s in recession or growing, there’s a little bit of safety in terms of its currency, and lately it’s been strengthening,” says Tom.

“You can look at each market individually. They have their pros and cons. In terms of which one has gone through a major correction and is poised for growth, comparing all markets listed, and if you look at just real estate trends historically – not even looking at projections but just at what has happened the last 5-10 years – it’s quite easy to see,” he says.

Other territories, on the other hand, have not been tested as America’s has, nor are they as affordable. Quality of life also comes into play and the US in general ranks highly in this category.

Of the hundred thousand acres of land Walton controls, two thirds are in the US, all acquired within the last 8 years. “As those properties have gone through the recovery and are coming to the point of development, the opportunity for us is to monetize those assets – basically take them to the development stage, and that’s going to be the biggest growth potential for our company in the next coming 10 years.”

RMB devaluation has somehow helped the company’s recent sales efforts. “It’s funny how the flight of money follows the perception of where they think the dollar is going to go,” says Tom, as the influx of capital into China has seen some shift in course. This movement strongly hints back to a distinctly Asian character.

“Astute investors, who probably have a lot of investable cash, work very quickly. It’s amazing. If you want to get a feel of which way the investment market is going, a few key, high net-worth individuals give a very good indication of which way the market is going, in China anyway. One of the things that Asia’s known for is no hesitation, reacting and making decisions quickly. They follow that type of mentality – being on top of things, not afraid to make decisions. Non-Asian investors in contrast are less transactional, more long-term focused, don’t like to react as quickly to current market conditions, have a longer outlook, and are more portfolio-based.”

While seemingly favoring one personality over the other, Walton’s offerings are unlikely to deviate from their core value. “We don’t change our business model with the investor’s mindset. Our product remains the same. It’s done very well for us and we’ve been quite successful for 23 years. We don’t change our investment to fit the marketplace, although that might be a detriment to us here in Asia, since people like quick, fast investments. Asian investors however love real estate. This affinity with real estate helps us. When people know and believe in something, they’re willing to change their mindset despite what they’re accustomed to.

“The marketplace has so many different types of products and structuring of investments, but in times of volatility, change, and regulation, people like to flow back to the traditional forms of wealth. What asset class has provided for individuals for hundreds of years? It’s very straightforward: land, real estate. We go back to the feudal system; you had status and wealth if you had land. Those fundamental concepts ring loud and strong today as they had hundreds of years ago. Instability always seems to have people focus back to the traditional models.”

With constant change in investment markets, Gary Tom believes that the best indication of the future is what has recently transpired. A development he has observed is that many larger, more successful pension funds and top performing portfolio managers, not sticking to convention, have begun to incorporate real estate in their planning. Diversification into alternative asset classes is widely endorsed. The Canadian Pension Plan has real estate exposure, and the Yale Endowment Fund takes a diversified approach that has been able to generate stable returns. The Walton International mandate is to provide that integral, critical piece investors need.

“The investment marketplace continues to be as volatile, complicated, tied, interdependent, and globally related as it ever has been. The Walton business model remains the same: to continue to buy land in the path of growth. We take a long-term approach in everything we do. It comes down to the way we conduct and build our business. Land does not move quickly. It’s a very slow but methodical and patient process; one that you can see is proven. That’s the way we approach our business as we continue to move forward.”

Trends Shape Future for Insurer With a ‘Personal Touch’