With a net worth of $7.4 billion, 48-year-old Zhou Qunfei, the founder and CEO of Lens Technology, is once again the world’s richest self-made woman, according to Forbes.

Born in a village in Hunan province in East China, Zhou didn’t have an easy childhood. She lost her mother when she was five and her father went blind and lost a finger in a factory accident. She had to learn how to survive on her own, she tells CNBC Make It via email: “I had to constantly think about where my next meal is and how I am going to get it.”

To earn tuition, Zhou dropped out of high school at age 16 and went to South China’s Shenzhen city to work at a watch lens factory in 1986. She was later promoted to a managerial role. However, she had bigger dreams.

In 1993, with 20,000 HK dollars savings (or about $2,547.80 U.S. dollars), Zhou and eight of her family members set up a screen printing workshop in a three-bedroom apartment in Shenzhen, which served both as their working and living space.

In that apartment, she launched her first company. Fast forward 10 years, Zhou had built a factory making watch lenses and employed 1,000 people. But her fate changed in 2003 when she got a call from Motorola, asking if she wanted to be a supplier.

Zhou accepted the invitation which helped launch her business internationally. Now CEO of Lens Technology, Zhou has built an empire manufacturing glass for tech giants such as Tesla, Apple, Samsung and Huawei.

Zhou attributes her success to her perseverance. “My biggest challenge was when I beat other rivals and won the contract with Motorola in 2003,” Zhou says.

Zhou had just started out and had little flexibility in her company’s finances but wanted to ensure the deal went through. As a result, Zhou said she sold her house and other valuables to meet the company’s demands. However, she still lacked funding and said she became desperate.

Zhou admitted that it was the darkest moment of her entrepreneurial life. “I stood on the platform at Hung Hom Station in Hong Kong, almost jumped off, delirious,” she said, “thinking that when I am gone, all the trouble will too be gone.”

But then a phone call from her daughter pulled her back to reality. “I realized that for my family and employees, I cannot give up. I had to carry on.” With Motorola’s help, she overcame the financial issues.

In 2004, Zhou’s Lens Technology sold over 100 million units for the Motorola V3 model alone —the flat-screen mobile phone with the iconic greeting “Hello Moto.” In 2007, Zhou’s cover glass beat the other Chinese vendors to become a major supplier for Apple.

On March 18, 2015, 22 years after she started the family workshop at that three-bedroom apartment, Zhou’s Lens Technology went public. Today, the company is valued at $11.4 billion, with over 82,000 employees across China, according to Forbes. 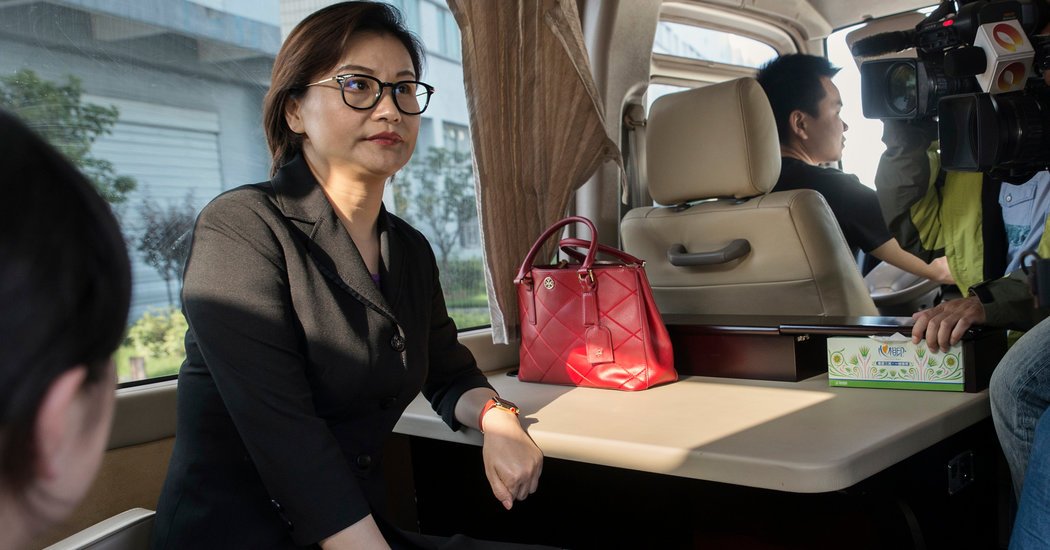 Zhou Qunfei leading a media tour of her company, Lens Technology, which is a multibillion-dollar operation at the vanguard of China’s push into high-end manufacturing. | Photo Credit Gilles Sabrie for The New York Times

In an interview with CNBC Make It via email, Zhou shared three pieces of advice for entrepreneurs:

Zhou said entrepreneurs always need to be prepared for what’s to come. She says there are a few aspects to master: “First, improve your overall competitiveness. Second, you must be mentally strong. Third, strengthen your understanding of the market and your competitors,” Zhou tells CNBC Make It.

She said her experience while working as an assembly line worker and later as the manager for her first employer helped her gain confidence, which was crucial to Lens Technology’s early days. “You must gather the courage to face failures,” Zhou added.

She also said she would prepare several backup plans when she went to visit clients during her startup years: “I was always thinking about what I am going to say if they reject my proposals, because the rejections were constant, you need to prepare well.”

2. Keep the enthusiasm for learning

“The clients won’t give you a better price for your products simply because you have a higher degree,” Zhou said, “but your knowledge of the business will help maintain the competitiveness of your company.”

As for Zhou herself, she took part-time courses while working as a factory worker and obtained her certificates in accounting, computer operations and even a commercial truck driver’s license.

3. Never give up easily

Zhou said many people would experience a serious blow to confidence when they encountered setbacks. But the key to success is to persevere, especially during the most difficult times.

For a team-building exercise, Zhou once took 20 of her company’s executive team to climb the Dawei Mountain in Hunan Province, which is more than 5,000 feet above sea level. Some team members wanted to give up halfway up the hill. However, she insisted that they do not stop and march on.

“Because when you give up halfway, you won’t have the courage to come back and start from the bottom all over again, you will still give up,” she said. “Only when we persist, can we succeed. Don’t give up because of a little setback.”

Read the original article at CBNC

“No Heaven Above, No Hell Below, Can Deny Us Our Right to Progress!”