A MAN FOR ALL SEASONS!

WANG QISHAN (Chinese: 王岐山; born 1 July 1948) is a senior leader of the Communist Party of China. Since 2012 he has been a member of the Politburo Standing Committee, China’s highest decision-making body. He serves as Secretary of the Central Commission for Discipline Inspection, and has emerged as the public face of General Secretary Xi Jinping’s anti-corruption campaign since 2013. Widely held as a reformer of the public sector, he is our choice for MAN OF THE YEAR.

Perhaps, the case for our choice of Wang Qishan as Man of the Year, could best be summed up by the words of U.S. Secretary of the Treasury Henry Paulson who described Wang as “decisive and inquisitive” and “an avid historian. A man who enjoys philosophical debates and has a wicked sense of humor.”

Paulson writes, “He is a Chinese patriot, but he understands the U.S. and knows that each of our two countries benefits from the other’s economic success. And he is bold — he takes on challenges, does things that have never been done before and succeeds. Wang managed the largest bankruptcy restructuring in China’s history in 1998 and thereby prevented a banking crisis that could have crippled the country’s growth.”

Unafraid to cite corruption regardless of where he finds it, he is quick to point it out. Some Chinese Communist Party officials are threatening to quit rather than pay membership fees, others cling to forbidden beliefs in religion or superstition, and some are even seeking to seize state power and split the party, Wang Qishan, China’s anti-corruption czar told party members in a recently publicized speech.

“Systematic corruption,” is gripping some government agencies, said Wang, who is considered the most powerful man in Beijing after Xi Jinping. The head of the Central Commission for Discipline Inspection, the party’s internal anti-graft agency, delivered the speech at a meeting with China’s top political advisory body on Oct. 31, but it wasn’t until made public until Dec. 1.

Tough talk about corruption is not unheard of from Wang, who was behind the high-profile prosecution of Bo Xilai and others, but his extremely harsh manner and candid rundown of the party’s problems mean the speech was given great importance. It was first published online by top state newspaper People’s Daily, and has been widely reposted by Chinese news portals since. 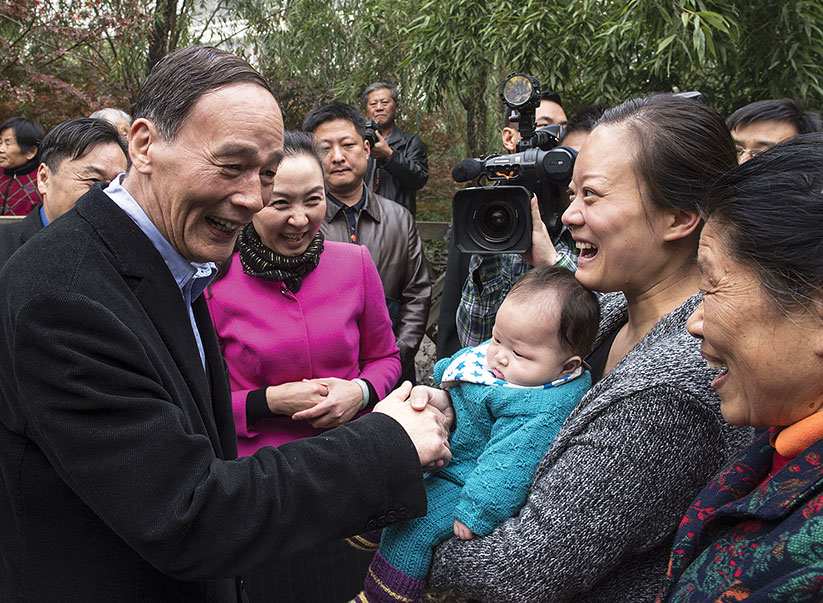 Mr. Wang Qishan talks with local residents at Baibuting Community in Wuhan, capital of central China’s Hubei Province. Wang made an inspection tour in Hubei Province from Nov. 22 to 23. (Xinhua)

An avid technocrat, Wang Qishan is widely respected at home for his ability to uphold China’s values overseas as well as help steer the nation toward a better a sun-lit tomorrow. Amidst China’s vast and growing commercial markets, he is regarded as a stalwart who stands solidly behind a strong leadership keen to make China an increasingly bigger economic superpower.

Wang Qishan was born in Qingdao, Shandong, but his ancestral hometown is considered Tianzhen, Shanxi.

After graduating high school, Wang worked in the countryside, performing manual labour with peasants in the revolutionary heartland of Yan’an. In 1973, according to sources, Wang was admitted as a “Worker-Peasant-Soldier student” at Northwest University in Xi’an, where he studied history and graduated in 1976. Wang met Yao Mingshan (姚明珊), the daughter of Yao Yilin, in Yan’an and the two later wed. After graduation, Wang worked in the Chinese Academy of Social Sciences, researching late imperial Chinese history (1800s onwards) and Republican era (1912 – 1949) history.

In 1982, Yao Yilin became an alternate member of the Central Secretariat, and Wang was elevated to the Secretariat’s office on rural policy research. This marked the beginning of Wang’s sterling political career.

From 1982 to 1988, Wang worked in various posts in policy research. In 1988, Wang was transferred to become the chief executive of the Agricultural Investment Trust of China. A year later he became Vice Governor at China Construction Bank. Wang became Governor of the China Construction Bank in 1994 and served until 1997. During this time, Wang facilitated cooperation with U.S. investment bank Morgan Stanley, and was instrumental in the founding of China’s first investment bank, the China International Capital Corp (CICC), and served as its first executive Chairman.

In 1997, Wang was transferred to Guangdong to become its Executive Vice Governor, one of the highest posts in the provincial government. At the height of the Asian Financial Crisis, Wang assisted then Guangdong Party Secretary Li Changchun in managing non-performing loans of various state owned enterprises in the province. Since then, Wang developed a reputation for being a “financial specialist”. Wang then served as the General Office chief of the State Economic Structural Reform Commission.

“He is a Chinese patriot, but he understands the U.S. and knows that each of our two countries benefits from the other’s economic success. And he is bold — he takes on challenges, does things that have never been done before and succeeds.”

Mr. Wang Qishan (L), a member of the Standing Committee of the Political Bureau of the Communist Party of China (CPC) Central Committee, meets with former U.S. Secretary of State Henry Kissinger at the Diaoyutai State Guesthouse in Beijing, capital of China, Dec. 1, 2016. 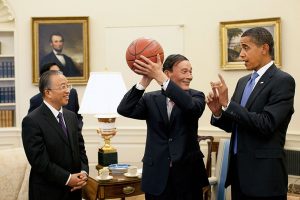 Mr. Wang Qishan, center, holds the autographed basketball given to him by President Barack Obama following their Oval Office meeting Tuesday, July 28, 2009, to discuss the outcomes of the first U.S.-China Strategic and Economic Dialogue.

Wang took over from disgraced Beijing mayor Meng Xuenong when SARS struck the Chinese capital in spring 2003, at which time he had only served as the Party Secretary in Hainan for five months. After arriving in Beijing, he took an open approach to the release of information about SARS to the public. In contrast to the lack of transparency during the administration of his predecessor, Wang called for a daily press release on the latest information about SARS.

Wang became Mayor of Beijing in early 2004. As mayor, he also served as the executive chair of the Beijing Organizing Committee for the Olympic Games (BOCOG). In March 2005, during a local radio show, Wang apologized on air to the Beijing public for an ongoing natural gas supply shortage in the city. The action won praise in the media and was said to have decreased the perceived distance between government officials and the public.

In 2007, he became a member of the 17th Central Committee and the 17th Politburo of the Communist Party of China; in 2008, he was named a Vice Premier of the State Council, in charge of finance and commerce. In 2009, Wang was appointed by President Hu Jintao as his special representative to chair the Economic Track of the U.S.-China Strategic and Economic Dialogue for the Chinese side. He was named as one of the most influential people in the world in the 2009 Time 100 list.

In the lead-up to the 18th National Congress of the Communist Party of China in 2012, Wang was seen by observers as a rising political star, with an diverse political pedigree spanning the realms of high finance, regional government, and policy development and execution. He ultimately entered the ranks of the Politburo Standing Committee, considered the pinnacle of power in China, at the 18th Party Congress, taking on the job of the Secretary of the Central Commission for Discipline Inspection, the party’s top anti-graft body. Xi Jinping became General Secretary of the Communist Party of China at the same Congress. The appointment was unexpected given Wang’s experience in the economic realm; he was seen as a more likely candidate for executive Vice-Premier. It is believed that Wang was friends with Xi beginning in their youth, they shared a bunk when they were both performing manual labour in Shaanxi province during the Cultural Revolution, and Wang lent Xi books related to economics; Wang also had dealings with Xi during the latter’s time as a regional official in Fujian, it is understood. 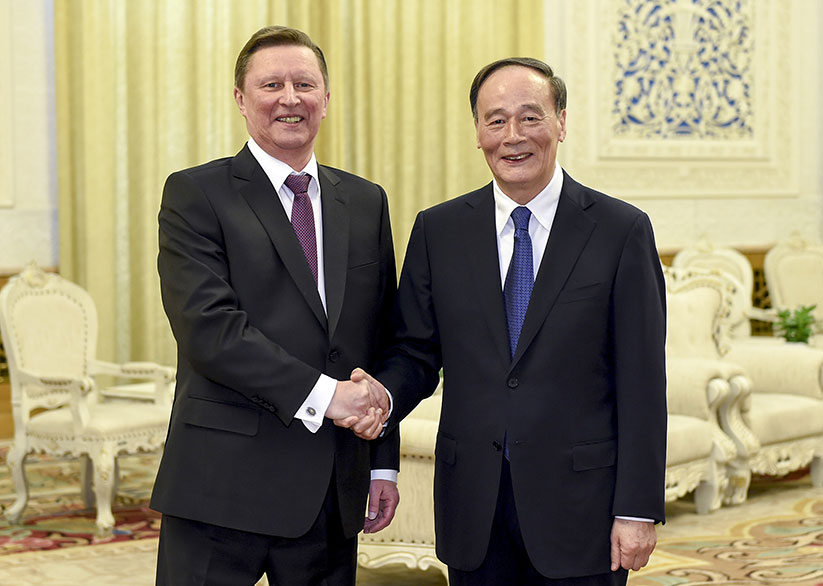 Beginning in late 2012, Wang emerged as the public face of Xi Jinping’s anti-corruption campaign, the most far-reaching campaign of its sort since the founding of the Communist-ruled state in 1949. He also became the Leader of the Central Leading Group for Inspection Work, responsible for dispatching teams to the provinces and state-owned enterprises with the goal of rooting out corruption. Following the 18th Party Congress, Wang was often considered the second most powerful man in China, second only to Xi, the paramount leader and Party General Secretary.

Wang’s anti-corruption work gained him accolades within the party leadership, with many calling for an extension of his term at the 19th Party Congress in 2017. Since the 16th Party Congress, the rule of ‘seven-up, eight-down’ had been informally applied for every Politburo Standing Committee member (i.e., if a Standing Committee member is 68 at a time of the Congress, he must step down, but if he is 67, he can continue to hold a seat). If Wang were to continue his term past 2017, he would break this convention. Wang himself was reticent to this possibility. During a press conference, Wang stated, “if I were a department-level chief, I would be long retired. Even if I were a deputy minister or a minister, I would be retired by now.”

Compiled by Michael Downs in Beijing