Body art has come a long way from just being a rebelous form of expression, but in a sense, the journey has only just begun, says CHRIS ANDERSON.

“There is a large dichotomy of work in the industry with the two fields being classified as belonging to either ‘tattoos’ or ‘tattoo art’. The first is what most people would commonly associate with tattoo studios – pre-fabricated or flash designs, quick appointments often comprising of smaller sized works. The second, tattoo art, is what we define as unique creations by genuine artists,” Anderson explains.

He says, acceptance of tattooing as a mainstream form of body modification has grown exponentially in popularity over the past few years with the number of shops in Hong Kong exploding from less than fifty to well over 200 today.

“Lack of any government regulations of studio operational requirements as well as venue location are partially fueling this dramatic increase. One noticeable shift relates more to prominence rather than any specific kind of tattoos being chosen. Many becoming more comfortable with visible tattoos, choosing to proceed with full sleeves (i.e. ink covering their arms – from shoulders to wrist). However, while this growth in studios has – primarily for younger generations – raised the profile or perhaps again acceptance of tattooing it is harder to say whether the differentiation between ‘tattoos’ and ‘tattoo art’ as a readily available choice to those getting tattoos poses a question that is much harder to quantify.” 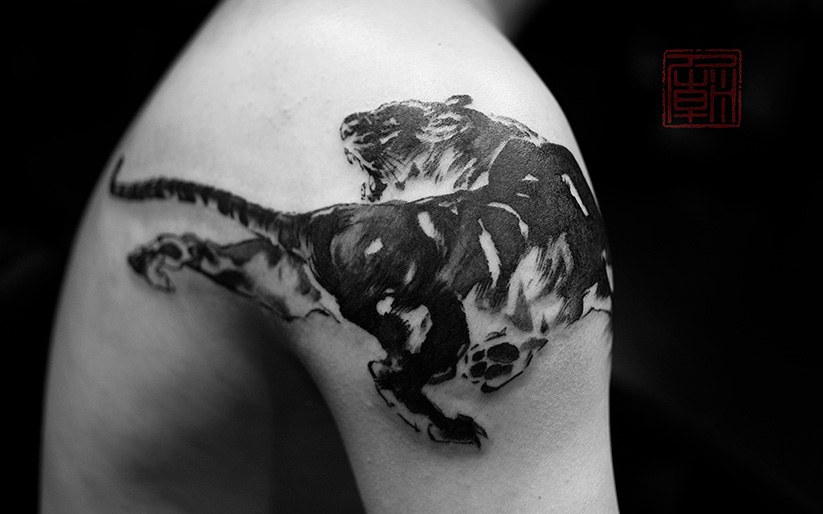 There is a large amount of competition if speaking in relation to general market share. Yet here comparisons to any other industry – such as between bulk sale retailers or boutique producers – can be made. Our artists’ are the only capable of creating a range of particular aesthetics, having developed a number of techniques in tattooing. For example Joey Pang is the world’s only professional Chinese calligraphy and Asian brush painting tattoo artist. Just with traditionally mainstream artistic mediums such as painting, any genuine artist will have their own style of composition, thereby fundamentally operating as a monopoly for their particular aesthetic. Additionally, each commission we complete is created for the single client and then never repeated so it is a far more collaborative process. What sets the work apart? If anyone across the globe wished for a piece in the artists’ particular style then they have a single choice of where to procure this.” 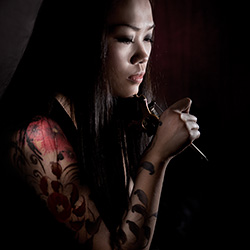 Joey Pang, Tattoo Temple’s founder and Art Director, has dedicated herself to capturing a deeper, more authentic portrayal of Chinese culture through the utilization of a medium where none had existed before (i.e. skin). “Through the European acceptance of tattooing we have created space to forge a ‘cultural bridge’ between Eastern and Western aesthetics. Without relegating or constraining compositions to the static canvas Joey established an entirely new category of patrons who were previously unaware of Chinese artistic traditions. Equally, whilst historically consigned only to underground associations particularly here in Hong Kong her vision extends to presenting tattoo art to Eastern audiences as embodying a capacity for legitimate artistry through the implementation of culturally venerated techniques.

From this we are moving into placing additional emphasis on the artwork itself, returning in part to traditional canvases so the underlying influences between pieces from both fields of practice are emphasized and or respected in their own right. One might say irrespective of the canvas we are attempting to have art as the focal point, regardless of its location,” says Anderson.

“We are currently finalizing a new collaboration with an American sculpture that will be the first display of body art of its kind – this will first be exhibited in Los Angeles in late 2016 before moving throughout different galleries overseas. We will also be releasing a painting collection which offers a novel interpretation of traditional Asian water-brush techniques that are further being transitioned into tattoo art over the coming years. The first of Joey Pang’s ‘Modern Ink’ canvases will be shown at City Hall here in Hong Kong this December.”

https://www.mediazone.com.hk/hkmvc/wp-content/uploads/2017/10/cropped-MZ_Logo_HKMVC_b.png 3312 890 January 9, 2017October 6, 2017 https://www.mediazone.com.hk/hkmvc/wp-content/uploads/2017/01/hkmvc17_BarPacific.jpg 800 502
Hong Kong nightlife has no shortage of expensive, trendy, flashy watering holes but to bring in a concept that offers both style and quality at reasonable prices you look to BAR PA...

https://www.mediazone.com.hk/hkmvc/wp-content/uploads/2017/10/cropped-MZ_Logo_HKMVC_b.png 3312 890 January 6, 2017October 6, 2017 https://www.mediazone.com.hk/hkmvc/wp-content/uploads/2017/01/hkmvc17_Goodunion.jpg 800 502
Leading the new frontier of wellness is a pioneer in the field of aesthetic medical services, says VAM CHENG. After decades of development driven by changes in consumer dema...