In 2015 for the first time the world saw thousands of foreign troops march in China’s Victory Day parade in 2015 in what is largely seen as a show of solidarity. Now President Xi Jinping’s economic initiative is China’s sending a clearer message to the world. Is the world right to be suspicious of China or would a stronger China be in everyone’s interest?

The One Belt, One Road (Obor) project excites economists and analysts interested in new prospects for international trade. Since the idea was revealed in 2013, the project has become synonymous with the potential of certain emerging market economies and the rise of China’s economy.

In 2013, China’s president Xi Jinping proposed a new economic framework that would connect China’s Silk Road Economic Belt project in Central Asia with its Maritime Silk Road through connected bodies of water from the South China Sea to the Indian Ocean. In essence, these trade strategies focus on increasing China’s connection with countries along the historical Silk Road in Eurasia, while creating a new Silk Road through Asia to South Asia and Africa.

One part of the project is based on the creation of road connections between China and Eurasia, including infrastructure projects such as highways and rail lines. The other part of the project concerns maritime routes that will connect China with South East Asia, South Asia and ports up and down the east coast of Africa.

The scale of this vision, if completed, seems the project’s greatest selling point and potential challenge. According to a mainland China report, the trade links outlined would cover 65 per cent of the world’s population, one-third of global GDP and a quarter of all the goods and services in the international economy.

China — which has too many factories making too much steel and cement — is making sure that its own companies will be the biggest beneficiaries.

Such a concentration of goods and services would upend how traditional commodities such as energy are traded. Some observers have compared the project to the Marshall Plan in Europe after the World War 2.

The project has its share of critics. Some analysts have argued that China is pushing forward with the project to extend its political influence.

They suggest that there is no concrete demand for the Obor’s infrastructure projects in under-developed central Asian countries. Rather, China is building these projects as a way of extending and entrenching its political influence.

Some observers also view the project as a way for the Chinese to expand their influence in new parts of Africa, South Asia and even Europe. China’s construction industry is already booming across Africa.

New maritime routes connecting China to the rest of littoral Asia would expand Beijing’s economic (and political) power to a remarkable degree.

A challenge for the programme, however, is funding. Conservative estimates note that Obor will require at least $2 to $3 trillion each year. Several investment vehicles have been created such as the Asian Infrastructure Investment Bank and the Silk Road Fund, but the debate about the use of public funds for these projects show a measure of concern.

The One Belt, One Road idea is an international community project with China taking the lead. If the Chinese are able to convince countries that Obor will be a force for good, the project could revolutionise global trade. 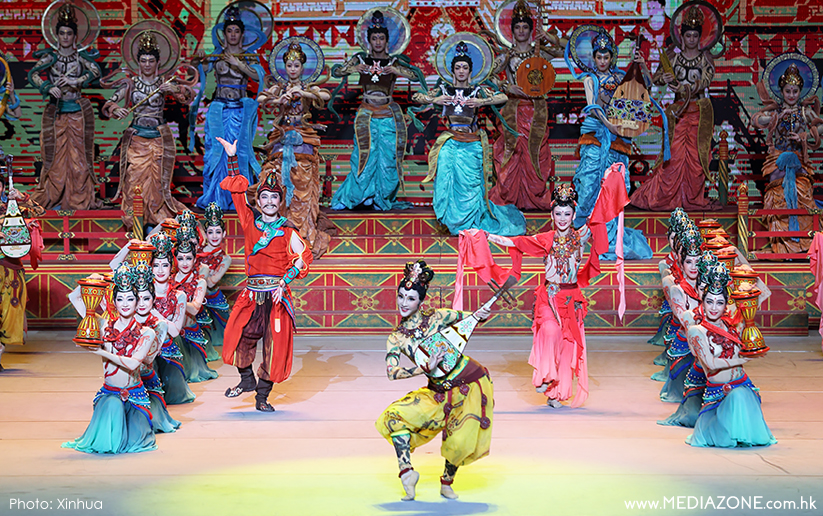 The One Belt, One Road idea is an international community project with China taking the lead. If the Chinese are able to convince countries that Obor will be a force for good, the project could revolutionise global trade.

China watchers say Xi is aiming to use China’s wealth and industrial know-how to create a new kind of globalization that will dispense with the rules of the aging Western-dominated institutions. The goal is to refashion the global economic order, drawing countries and companies more tightly into China’s orbit.

Critics say the projects inherently serve China’s economic interests. With growth slowing at home, China is producing more steel, cement and machinery than the country needs. So Mr. Xi is looking to the rest of the world, particularly developing countries, to keep its economic engine going.

“President Xi believes this is a longterm plan that will involve the current and future generations to propel Chinese and global economic growth,” said Cao Wenlian, director general of the International Cooperation Center of the National Development and Reform Commission, a group dedicated to the initiative. “The plan is to lead the new globalization 2.0.”

It is also to be noted that Xi’s plan stands in stark contrast to President Trump and his “America First” mantra. The Trump administration walked away from the Trans-Pacific Partnership, the American-led trade pact that was envisioned as a buttress against China’s growing influence. 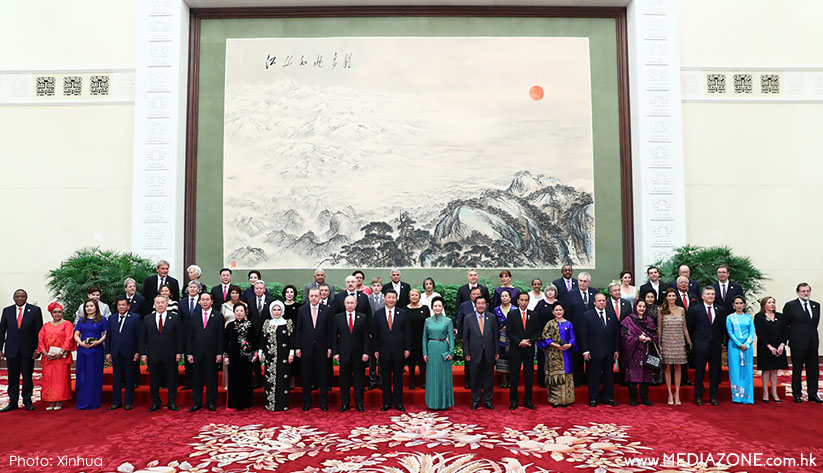 A challenge for the programme, however, is funding. Conservative estimates note that Obor will require at least $2 to $3 trillion each year. Several investment vehicles have been created such as the Asian Infrastructure Investment Bank and the Silk Road Fund, but the debate about the use of public funds for these projects show a measure of concern.

China is moving so fast and thinking so big that it is willing to make shortterm missteps for what it calculates to be long-term gains. Even financially dubious projects in corruption-ridden countries like Pakistan and Kenya make sense for military and diplomatic reasons. The United States and many of its major European and Asian allies have taken a cautious approach to the project, leery of bending to China’s strategic goals. Some, like Australia, have rebuffed Beijing’s requests to sign up for the plan. Despite projects on its turf, India is uneasy because Chinese-built roads will run through disputed territory in Pakistan-occupied Kashmir.

But it is impossible for any foreign leader, multinational executive or international banker to ignore China’s push to remake global trade.

Piece of the Pie

“China’s Belt and Road initiative is starting to deliver useful infrastructure, bringing new trade routes and better connectivity to Asia and Europe,” said Tom Miller, author of “China’s Asian Dream: Empire Building Along the New Silk Road.” “But Xi will struggle to persuade skeptical countries that the initiative is not a smokescreen for strategic control.”

Western companies are angling aggressively for a piece of the action. Citibank won a contract from Bank of China to handle a complex $3 billion bond offering recently to raise money for opening branches across Asia, Eastern Europe and East Africa. The technology and manufacturing company Honeywell International is reportedly selling equipment to Central Asia for processing natural gas.

Some non-Chinese companies are also tweaking their businesses to win more orders related to Beijing’s plan, and G.E. has rearranged its marketing staff for global power equipment to give them priority.

China’s spending doesn’t necessarily mean immediate profit. Most of the money has yet to be earmarked, much less spent. And China — which has too many factories making too much steel and cement — is making sure that its own companies will be the biggest beneficiaries.

Analysts say companies like Caterpillar, for example, will have to contend with a fast-growing, government-controlled Chinese maker of construction machinery, the Xuzhou Construction Machinery Group, known as X.C.M.G. Such businesses, facing a maturing market at home, are eager to find new markets — a core ambition of the plan.

At one of X.C.M.G.’s cavernous factories here in north-central China, workers are rushing to double the number of excavators that can be made each year, mainly by adding robots to the assembly process. The initiative has the factory humming 16 hours a day, six days a week.

“‘One Belt, One Road’ makes our internationalization strategy like a tiger with wings added,” said Wang Min, X.C.M.G.’s chairman.

For businesses, the plan offers uncertainty as well as promise. The infrastructure that China is building could someday become the avenues for billions of dollars in increased trade — or become debt-ridden sinkholes. Xi is believed to pressuring companies already doing business in China to participate no matter what the prospects. 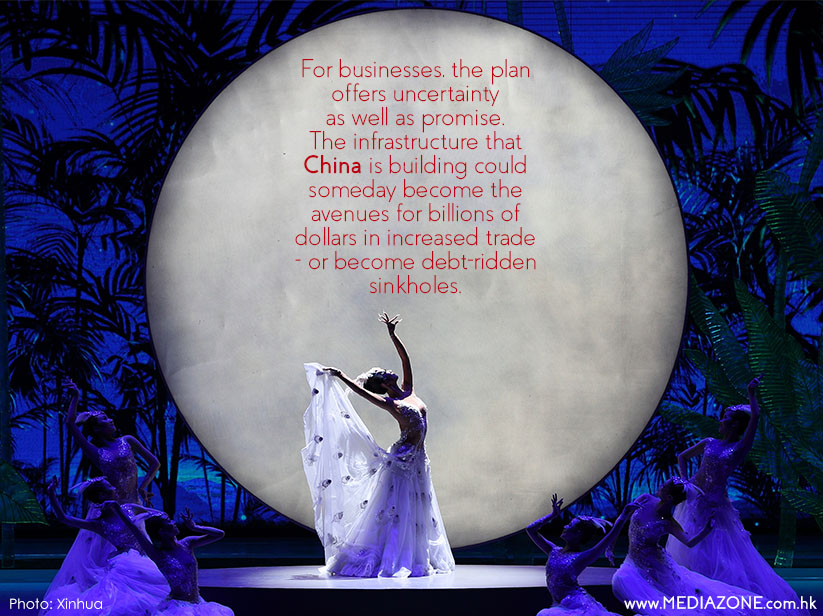 Xi’s plan stands in stark contrast to President Trump and his “America First” mantra. The Trump administration walked away from the Trans-Pacific Partnership, the American-led trade pact that was envisioned as a buttress against China’s growing influence.

The hope of future prosperity is entic – ing. Li and Fung, a Hong Kong company that for decades has sent Chinese-made goods to American and European depart – ment stores, is now marketing to small and medium-size retailers in the devel – oping world. It is a bet that the Chinese initiative will lift consumer spending across dozens of countries, said Victor Fung, chairman of the Fung Group, its parent company.

Others are waiting to see whether China’s ambitious idea translates into actual investment — and whether Amer – ican and European companies will have a place at the table. They are particularly troubled that the program seems to be mostly about Chinese exports, and not much about imports. On all accounts most agree that China is determined to make the seemingly impossible, possible. It is also largely held that China’s critics are among those that fear China’s march toward relentless progress. At home and aboard Chinese benefit from China’s assent to global influence and about time too, they say. The world may well do with a new superpower keen to conquer through trade and friendship as opposed to armed aggression and colonization.

The writer is a China scholar and commentator based in Russia.