He is of no consequence. Rather, it is what he does that is changing the world and what’s even more important is, why.

By SHAWN DAWSON in WASHINGTON. 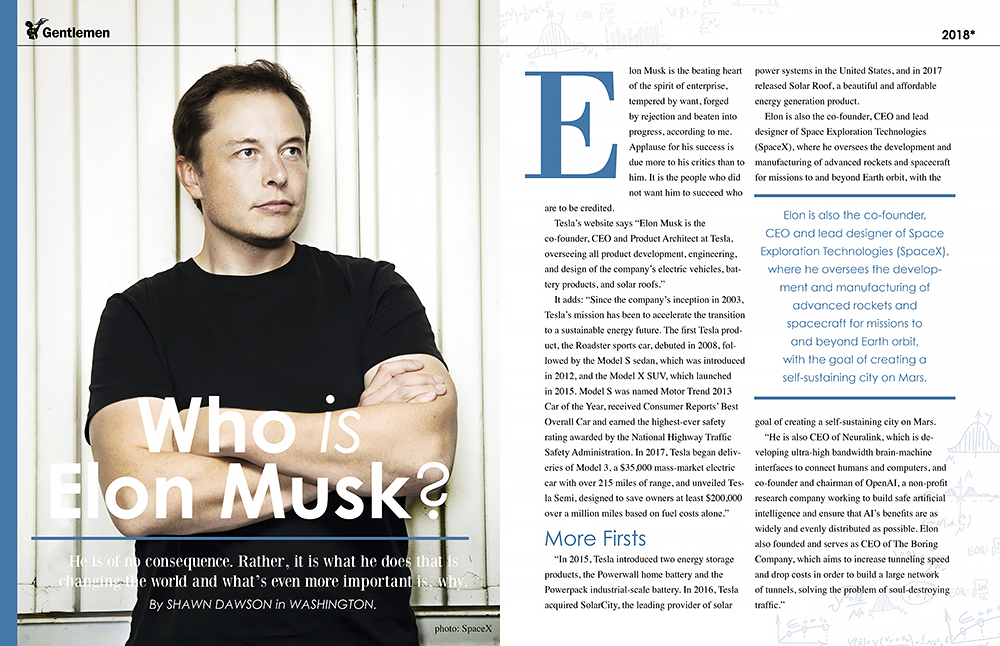 Elon Musk is the beating heart of the spirit of enterprise, tempered by want, forged by rejection and beaten into progress, according to me. Applause for his success is due more to his critics than to him. It is the people who did not want him to succeed who are to be credited. 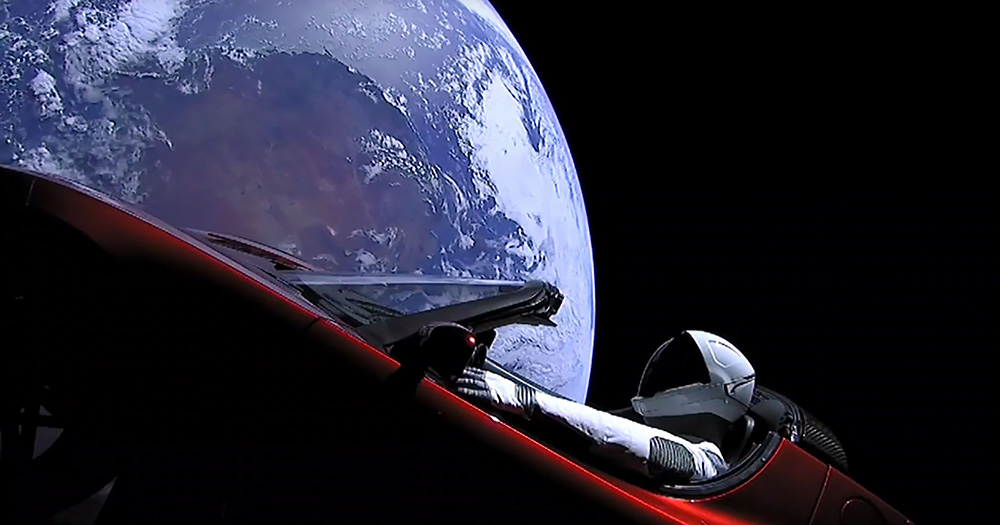 It adds: “Since the company’s inception in 2003, Tesla’s mission has been to accelerate the transition to a sustainable energy future. The first Tesla prod- uct, the Roadster sports car, debuted in 2008, followed by the Model S sedan, which was introduced in 2012, and the Model X SUV, which launched in 2015. Model S was named Motor Trend 2013 Car of the Year, received Consumer Reports’ Best Overall Car and earned the highest-ever safety rating awarded by the National Highway Trafc Safety Administration. In 2017, Tesla began deliveries of Model 3, a $35,000 mass-market electric car with over 215 miles of range, and unveiled Tesla Semi, designed to save owners at least $200,000 over a million miles based on fuel costs alone.”

“In 2015, Tesla introduced two energy storage products, the Powerwall home battery and the Powerpack industrial-scale battery. In 2016, Tesla acquired SolarCity, the leading provider of solar power systems in the United States, and in 2017 released Solar Roof, a beautiful and affordable energy generation product.

“He is also CEO of Neuralink, which is developing ultra-high bandwidth brain-machine interfaces to connect humans and computers, and co-founder and chairman of OpenAI, a non-profit research company working to build safe artificial intelligence and ensure that AI’s benefits are as widely and evenly distributed as possible. Elon also founded and serves as CEO of The Boring Company, which aims to increase tunneling speed and drop costs in order to build a large network of tunnels, solving the problem of soul-destroying traffic.”

“Previously, Elon co-founded and sold PayPal, the world’s leading Internet payment system, and Zip2, one of the first internet maps and directions services, which helped bring major publishers like the New York Times and Hearst online.”

But, this is only at the time of writing. By the time you finish reading this feature, Musk will have achieved much more for you than you will probably know.

Musk is unafraid of controversy so long as he knows that is offerings have humanity’s best at heart. Willing to face constant reluctance from politicians (many of whom see his ideas as threat) Musk powers on. Here’s a vid of him trying to help Australian’s get cheaper and more reliable natural power. Note the government’s “support” of an idea that could help the ordinary man. Enjoy Elon Musk here: ELON MUSK 60 MINUTES INTERVIEW – Australia’s Electricity Crisis NEW 2018

But, this is just one sign proving an old saying – when a genius appears in the world we will know by the number of fools arrayed around him.

Clearly the man believes in personal innate drive and appreciates education for its limitations as seen here: Elon Musk ‘I Don’t Give A Damn About Your Degree’

Next comes a vid of Elon Musk fielding questions from the world. Candid replies typify his character and that’s what frightens most people. He’s clearly someone with a “will-do” attitude, has the drive and ability to follow through and that all good but the danger is (for the establishment) that he wants to bring great things within direct reach of the common man and that isn’t something the rich and powerful want, unless of course they have a way of profiting from it.

What irritates Musk’s critics most (and I suspect he knows it, but doesn’t care) is his simple, honesty with which he puts forth his point. Unlike other flamboyant entrepreneurs he isn’t into the cheap hogging stunts like jumping in pools, caressing women in public or buying islands to impress the world with his wheeling and dealing skills. He’s a straight forward “do-er” and tells it like it is. We are going to enjoy his accent. 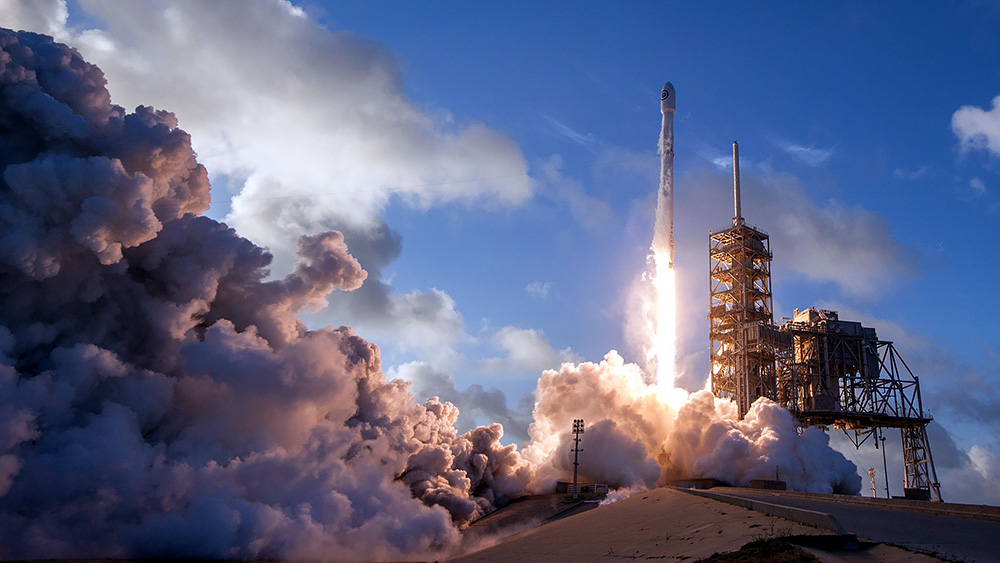 He’s clearly someone with a “will-do” attitude, has the drive and ability to follow through and that all good but the danger is (for the establishment) that he wants to bring great things within direct reach of the common man and that isn’t something the rich and powerful.

AI? How Soon Is Tomorrow? 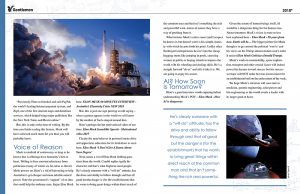 Given the nature of human beings itself, AI would be a dangerous thing for the human race. About tomorrow Musk’s vision is more or less best explained here – Elon Musk – 50 years from now, Earth will be…. The bigger picture for Musk though is to get around the political ‘won’ts’ and his views on the Trump administration won’t make it easier (Elon Musk Criticizes Donald Trump).

Musk’s work on sustainability, space exploration, transport and other crucial issues will indeed power his dreams toward success but his success we hope will NOT make him too inconvenient for an establishment built on the enslavement of the weak.

We hope Musk’s attention will soon turn to medicine, genetic engineering, solar power and bio-engineering as the world awaits a leader with its larger good at heart.

A Decade of Dedication to Digital Construction

Innovating to Improve Quality of Life